Hello dear readers, I feel like it’s been forever since my last plant/natural medicine post(I posted the Rowan tree post on 1st September), but I just wasn’t feeling inspired enough. And we all know the best posts are the ones,, that come naturally :) Today the idea to write about spruce tree just jumped in my head! I’m sure most of people just know it as the Christmas tree and would never think it could be edible or used for healing.

When I was a little girl I often ate the young fresh light green parts in the spring. They have a pleasant slightly sour taste. The spruce growths (we call them this way in Estonia, cause they are not exactly buds) are a great source for vitamin C, but they are also good for taking away fatigue and nervousness, they increase blood circulation and hematopoiesis, they are even slightly antibiotic. You can harvest them in the spring cutiing them, when they’re about 3-5cm long. You can also dry and grind them (needles and growths both) and add them to any food. Spruce growths are good expectorant and antibiotic so they’re tea is often used for bronchitis (even chronic), angina, cough and cold in general.

– Cover 1 tbls of growths with a class of boiling water, let it sit for 10-15 minutes. Drink warm half a glass at a time, up to 2 classes a day

-Cover 1tbls of growths with a class of boiling water in a thermos, let it sit for 4-6 h, drain and drink in small sips during one day

Baths are used for neurasthenia, uterine bleeding, leukorrhea and cardiomegaly. Boil up to 2kg of growths in 3-4 liters of water and drain it to the bath water, which should be about 34°C. It isn’t recommended to stay in the bath more than 20-30 minutes.

-Take 1 part of growths and 3-4 parts of water, boil for 10-15 minutes, pour through a strainer and let settle. Then pour through something thicker (cheesecloth for example). Mix 0,5kg of honey and 5g of propolis (bee glue) for 0,5 l of the boiled water from before. Heat up to 35-40°C degrees and let it cool down. Take it 1tbls before meals and keep it in your mouth for some time before swallowing. Keep in the fridge.

A vitamin infusion is often made from the spruce needles: the needles are crushed in a mortar with a pestle or passed through a mincer, then mixed 1:10 with water, lemon is added, it’s boiled for 20-30 minutes and then let sit for 2-3 hours and then drained. It’s used as a general strengthener or against scurvy, half a class a day after a meal.

Since the old times, spruce needles have been used against headaches. The small branches were crushed, placed between a linen cloth and wet a little with warm water, then placed around the head or neck.

Decoction for tracheitis (inflammation of the trachea), bronchitis (inflammation of the lining of the lungs) and bronchial asthma: 1 glass of water for 40 g of crushed/minced needles or half a glass of dried needles, boil for 20 minutes and let sit for 2 hours. Strain and add the water that had vaporized during boiling. Drink in one day divided in 2 or 3 times. The same decoction is used to gargle with during angina.

Decoction to make bandages for arthritis: 10 g of needles for half a glass of water, boil for 15 minutes, strain and add the water that vaporized during boiling.

As a cure for nasal polyps put 1tbls in 1 glass of boiling water, let sit for 2-3h and strain. Drink half a glass in the morning before breakfast. Do that for 3 weeks and then take a 3 week break and then do it again for another 3 weeks. This kind of course is made 2 times a year, the effects are said to be great! It’s also important to eat in moderation.

The needle (or growth) tincture is used on the hip or bone rheumatism. Take 5-10 parts of vodka and 1 part of minced needles or growths, let sit for 1 week before filtrating and shake it from time to time during the week.

-Tea for strong chronic cough, initial stage of tuberculosis, infections and respiratory diseases: 1/4 glass of crushed cones and pour 1 l of water over them. Boil on low heat until a third of the water is vaporized. Strain, drink 1glass 3-4 times a day 30-40 minutes before meals.

-In this recipe both cones and growths can be used. The cones need to be crushed first of course. Half a glass of cones or growths for half liter of water, bring to boil and boil for 30 minutes. Then let it sit for 15 minutes, after that strain through a cheesecloth (triple cheesecloth) squeezing it through. Use this decoction for inhalation or to gargle to treat tracheitis, angina, tonsillitis, laryngitis, pharyngitis, sinusitis, pneumonia and bronchiectasis. For inhalation on 60-80°C 2-3 times a day, for gargling 3-4 times a times 35-40°C.

In case of rhinitis and highmoritis use 5-10 drops of the same decoction (30-35°C) in each nostril. 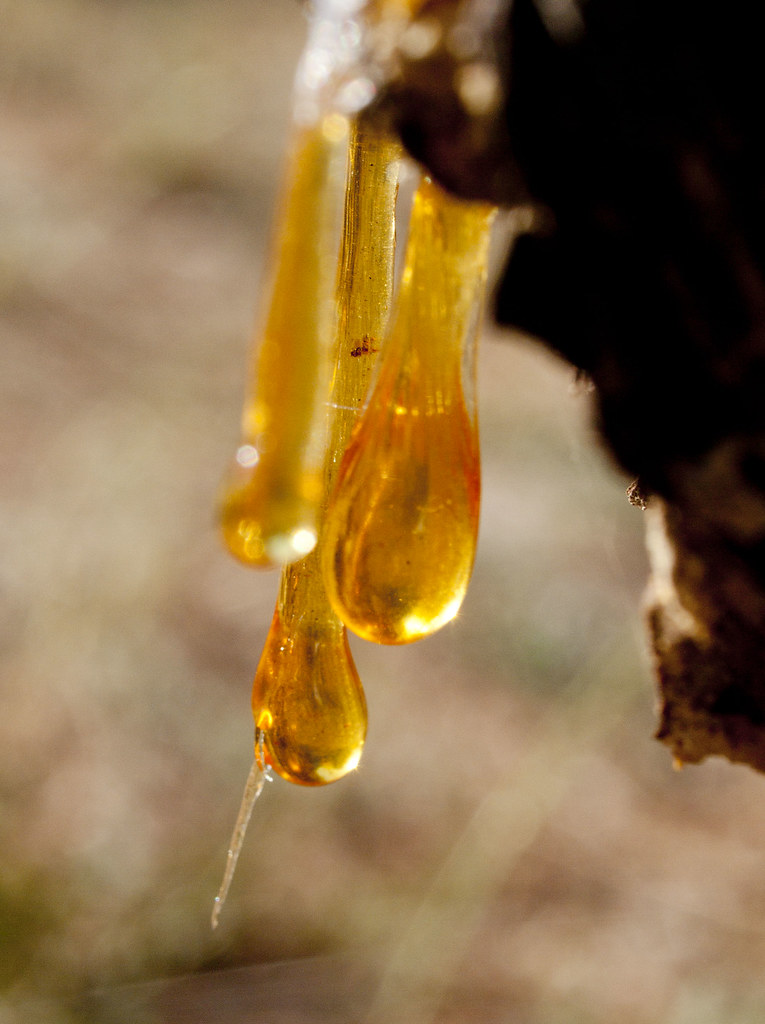 Spruce (or other conifers as well) resin has been a healthy predecessor of the chewing gum in all North-Europe, being used already during the stone age. In Finland it lasted even until the beginning of 20th century at some places. The resin was used especially by children and elders,not only as pastime, but it disinfected the mouth, kept the teeth white and gums healthy.

For chewing the suitable resin was the old hard one, that had covered a wound on a tree for a couple of years. The fresh and soft resin was used for other purposes. 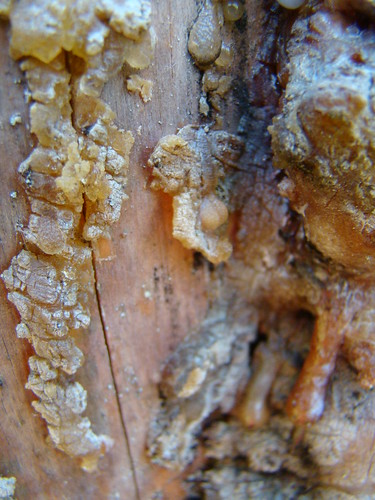 Today it’s recommended to chew on resin in case of angina, it is said to make the angina pass quicker.

One of the best wound treatment!

Resin is a great treatment from chapped skin to pus containing wounds., also for weeping eczema and trophic ulcers. It’s one of the best cures for opened wounds and to get rid of foot erysipelas. The resin binds the edges of the wound and leaves non or minimal scarring.

Opened wound & erysipelas. Warm up the resin to make it liquid (the resin melts between 90-100°C) and apply on a wound or erysipelas damaged area. The best is to use green soft spruce branches as a bandage, but a normal bandage will do as well. Keep it for 3 days, if it’s not healed as much as you want repeat the procedure (usually there is no need for that though).

Swelling and purulent wounds.  Ointment with more or less equal parts of spruce resin, honey, lard (you can also use plant based oils or other fats) and birch tar.

Attention! Spruce needle, growth or cone tea shouldn’t be used more then said in the recipe and not longer than 3-4weeks. If there is a necessity for another course, take a 7-10 day break and use another herb or plant in the meantime.

While writing this post I found out some new interesting things, that I want to share :) For example I didn’t know there was also a spruce beer, I’d love to try that! I also found out, that somewhere in the Sweden mountains there is a Norwegian spruce tree, that is 9,550 years old! How amazing is that? And let me leave you some sprucy recipes too ;)